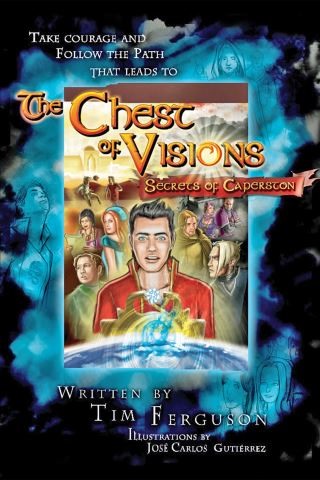 The Chest of Visions: Secrets of Caperston

Mattpaul is from the privileged Valley Community and is about to begin a prestigious job. When Chihaysu, a "prophet" who preaches equality amongst the "Haves" and "Have nots" in the world of Caperston, appears, introducing the idea of an unseen ruler named God, chaos follows. The idea of a God is unheard of in Caperston. Chihaysu also speaks out against the inequality of the classes in Caperston and Mattpaul decides to give up his promised job to follow Chihaysu. He enters a conflict where resisting powers, led by his father, cannot accept the idea that there is a God who sees all people as equals. Other young people join in the movement and tension arises as Mattpaul faces the ultimate test of faith. The book concludes with eight pages of activities for Christian youth leaders to use, when discussing the events taking place in the story.

Tim Ferguson: Tim Ferguson has inspired youth to action for thirty-five years. He is known as an innovative planner of youth activities. Tim recently retired as director of the Suffolk County Adult Protective Services in New York. Currently, he teaches a confirmation class and leads the Men in Faith group at Community Presbyterian Church in Deer Park, New York. He published his first book, Not the Same Old, Done-it-before Youth Meetings, in 2007.