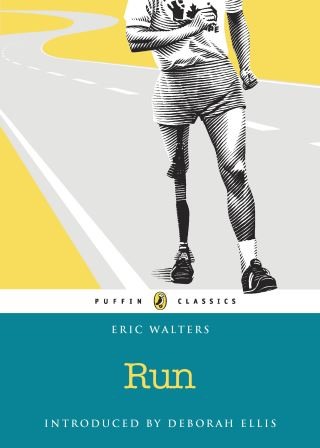 In conjunction with the Terry Fox Foundation, award-winning author Eric Walters brings Terry Fox and the Marathon of Hope to life for a whole new generation of young readers

This first book for young readers about Terry Fox and the Marathon of Hope, written by one of Canada’s best-known writers for young adults, is a blending of fact and fiction, fully endorsed by The Terry Fox Foundation. Hundreds of thousands of young Canadians participate in the Terry Fox Run each year and this book will further enhance their knowledge of Terry’s epic journey. Run introduces a national hero to a new generation of readers.

In his trademark page-turning style, Eric Walters, bestselling author of Trapped in Ice and Camp X, tells the story of Winston MacDonald. In trouble again after a suspension from school and a runaway attempt, Winston is sent to spend time with his father—a journalist who hasn’t been around much since his family split up a year ago.

Travelling to Nova Scotia with his father, who is covering what he thinks is just a human interest story about a man trying to run across the country, Winston spends a day with Terry Fox and his best friend, Doug. Their determination to achieve what seems like an impossible goal makes a big impression on Winston, and he takes courage and inspiration from Terry’s run. He is overjoyed when his father’s article about the Marathon of Hope ignites public interest across the country.

But when Winston discovers that his father’s next article about the Marathon of Hope will characterize Terry and Doug in an unflattering way, he is furious with his father and fearful of betraying his friends. Unsure of what to do or where to turn, Winston decides it is time to make a run for it himself...

Eric Walters: Award-winning author Eric Walters is one of Canada’s best-known and most prolific writers of fiction for children and young adults. He has published over eighty novels, which have won over one hundred awards, including eleven separate children’s choice awards, and have been translated into over eleven languages around the world. He is the only three-time winner of both the Ontario Library Association Silver Birch and Red Maple Awards. if (SYM == "BIO") { document.writeln("