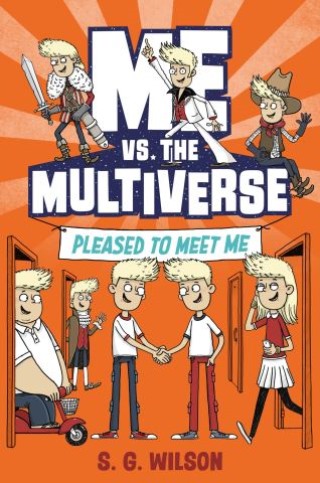 Me vs. the Multiverse: Pleased to Meet Me

What if you suddenly met someone who's you--only better? That's what happens in this hilarious new series for fans of Stuart Gibb's Moon Base Alpha and quirky sci-fi animated shows like Rick and Morty and Regular Show.

It all starts with a note folded into the shape of an origami octopus: "Hi, Me. Yes, you. You're me, and I'm you." If you believe this and the other origami notes that follow--which middle schooler Meade Macon absolutely, positively does NOT--the concept of parallel dimensions is true, and there is a convention full of alternate versions of Meade waiting for his RSVP. It's got to be a joke.
Except . . . the octopus is an origami fold Meade thought he invented. And the note writer has a lot of intel on him that nobody else should know. I mean, he's told his best friend Twig a lot about himself, but he's definitely kept mum about that time he sleepwalk-peed into his Lego container when he was six. Could Me Con be a real thing? And why does the origami stalker want him to go so badly anyway?

S. G. Wilson: Alternate versions of S. G. WILSON from parallel Earths have had many jobs, such as a centaur trainer (Earth 399), a court jester for Warlord Thud of the Wasteland (Earth 45), and a line dancer in Fortnite: The Musical (Earth 82)! But the S. G. Wilson of this Earth has mostly been content to write stuff and spend time with his family in Austin, Texas.