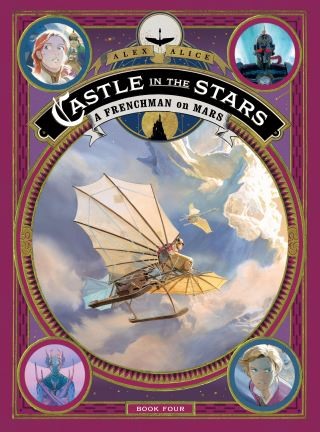 Castle in the Stars: A Frenchman on Mars

Alex Alice's Castle in the Stars: A Frenchman on Mars is the fourth volume in a lavishly illustrated graphic novel series set in a world where space exploration began during the Victorian era.

As Seraphin, Hans, and Sophie make their descent to the Mars surface—with stowaway Loïc and the wicked Gudden in tow—they’re prepared for danger. But with its gravity-defying rain and giant carnivorous beasts, Mars is even more treacherous than they expected.

When Seraphin suddenly finds himself separated from his friends and alone in the Martian wilderness, he must trust a mysterious shape-shifting creature to guide him back to safety. But this creature has an agenda of their own.

Alex Alice is a French graphic novel writer and artist, working in France and sometimes the U.S. Born in 1974, he grew up in the south of France and had the chance to travel around Europe, where he developed a life-long passion for the ruins and castles of the medieval and romantic ages.

This infused his art, from the grim medieval setting of esoteric thriller “The Third Testament” (1997-2003, co-written with Xavier Dorison) to the primeval, mythic world of “Siegfried” (2007-2011), an operatic re-telling of the northern saga of the great dragon-slayer.

In Castle in the Stars, he draws on Jules Verne and nineteenth century romanticism to create a watercolor world of adventure and wonder, to enchant adults and younger readers alike. His works have been translated in more than 15 languages.